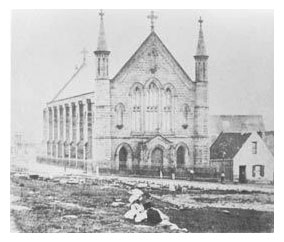 Built in the early 1840s, St Patrick’s stands in Sydney’s historic Rocks area, with a history reaching back to the very beginnings of Catholic life in Australia. Inseparably linked with St Patrick’s history is the name of William Davis, an Irishman transported for his part in anti-British uprisings in Ireland in 1798. Davis obtained land in The Rocks in 1809, and in the early years of the colony, when there was no resident priest in Sydney, his home became a centre of Catholic prayer.

In 1840 William Davis donated the land on which St Patrick’s is built, gifting that section of his 1809 grant bounded by Gloucester and Grosvenor Streets. The foundation stone was blessed on 25 August 1840, and the now elderly Davis astonished everyone when he came forward and placed a cheque for £1000 on the stone, an incredible sum in those days. Davis had prospered over the years through his business ventures, which included interests in grazing and licensed premises. Davis’ donation was matched by an equal grant from the colonial government.

The plans for St Patrick’s may have been loosely modelled on St Anthony’s Church (1833) in Liverpool UK, and were drawn by William Fernyhough, a Sydney draughtsman. Unfortunately the design did not fit the site, so the architect John Frederick Hilly was employed to re-design the church and supervise its construction. Even then, the church porch extended beyond the street building line, and a special Act had to be passed through the NSW Legislative Council in 1840 to legitimise the encroachment.

Built by Andrew Ross & Co., the church was officially opened on 18 March, 1844, a date chosen in preference to March 17, the feast of St Patrick; organisers were persuaded to avoid St Patrick’s day itself, lest the opening be marred by inebriated revellers and religious bigotry. Davis did not live to see the building completed, having died the previous August.

William Davis’ place in early Catholic history in Sydney rests not only on his substantial contribution to the construction of St Patrick’s, but also on his association with the inept and short-lived ministry of Fr Jeremiah O’Flynn, who arrived in the colony in November, 1817. At that time there were no resident Catholic priests in Sydney, and the only clergy sanctioned by the British Government were Anglican ministers appointed primarily to provide religious services for the colony’s convicts.

O’Flynn had letters of appointment from the Holy See to minister in Sydney, but had been unsuccessful in obtaining authorisation from the British Government. On arrival in Sydney he told the colony’s governor, Lachlan Macquarie, that appropriate permissions would shortly be forthcoming from the British Colonial Office, and commenced a semi-clandestine ministry to Catholic convicts and free settlers. Since there were no Catholic churches in Sydney, he used private homes for the celebration of Masses; two such venues were Davis’ cottage near the corner of Grosvenor Street and Harrington Street, and the home of James Dempsey, another Irish convict from the 1798 troubles, who lived nearby in Kent Street.

When no official papers arrived to authorise O’Flynn’s ministry, Macquarie had O’Flynn arrested in May, 1818, and deported him as an illegal immigrant. Whether by accident or design is unknown, but O’Flynn left the consecrated communion sacrament in a pyx in Davis’ home prior to his capture. It became a focus of prayer for a small group of Sydney Catholics, who kept daily vigil before the eucharistic sacrament for a period of 18 months; in November, 1819, the Catholic chaplain on a visiting French naval ship celebrated Mass for local Catholics, and most probably retrieved the sacrament.

Certainly the site of Davis’ cottage at St Patrick’s has been consistently revered by generations of Sydney Catholics because of its link with the early ministry of Fr Jeremiah O’Flynn, and the tradition of the veneration of the eucharistic sacrament there during 1818-19.

The first priest associated with St Patrick’s was Fr Francis Murphy, who was soon appointed first Catholic bishop of Adelaide; his episcopal ordination, the first ordination of a bishop to take place in Australia, occurred at St Mary’s cathedral on 8 September, 1844. For the early years of its life St Patrick’s did not have a resident parish priest, and visiting clergy attended for Sunday Masses.

In 1861 Archdeacon John McEncroe was appointed parish priest. McEncroe, an Irishman, was one of the great pioneer priests in Australia, to which he came in 1832 after some years in Carolina in the United States. He was the major force in helping establish an Australian Catholic newspaper – initially under various names in the early 1840s, and then as the famous Freeman’s Journal which appeared weekly for almost a century from 1849.

The Davis home was still standing when McEncroe was appointed. He later purchased the house and adjoining land, and used the site to build two stone terrace cottages extending up to the Grosvenor Street corner. Completing them in 1863, he leased the one on the corner as a shop, and lived in the second, which faced Harrington Street. Basement rooms from these buildings still survive below street level, and can be inspected on an escorted tour. The Davis cottage was demolished in the 1860s, but recent archaeological investigation has uncovered the footings of the building, and these can likewise be inspected.

McEncroe died in 1868. It was his wish that the Marist Fathers, a French missionary order established in Sydney since 1845, should succeed him in the parish. At McEncroe’s funeral, the archdiocesan vicar general, Austin Sheehy, took Marist superior Victor Poupinel aside and offered the care of the parish to the Marists. Poupinel readily accepted, subject to permission from Marist administrators in France; this was soon given, and the Marist Fathers have been responsible for St Patrick’s from that time.