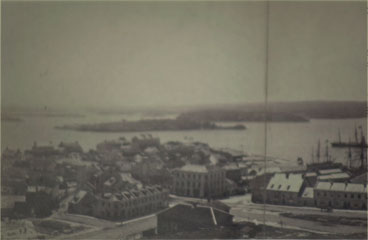 Governor Richard Bourke approved the site and building plan in 1833: “for a Roman Catholic School House, to be occasionally used as a Chapel”. The application for a land grant and school building was made on behalf of the Catholic community by Rev William B.Ullathorne OSB, Prefect Apostolic of Australia. This was two years before the arrival of Australia’s first bishop, John Bede Polding OSB.

Construction commenced in 1834, using “stone which is close at hand”. The single storey building was completed in April, 1835. The completed building was handed over in May, 1835, and was put into use immediately. A partition of folding doors divided the interior in half, providing separate class-rooms for the boys and girls. On Sundays, the school doubled as a chapel for Mass. When the school was officially inspected in 1839, 76 boys were under the charge of Mr Edward Hawkely, and Mrs Mary O’Brien was the teacher for 45 girls.

In March, 1843, the Christian Brothers took over responsibility for the school, and St Bridget’s (as the spelling was then) became an all-boys’ school under Brother Francis Larkin. A government inspection at that time gave high praise to the school, but after differences with Archbishop Polding over their right to recruit novices, the brothers withdrew from Sydney and returned to Ireland in 1847. Lay teachers again ran the school.