The first priest associated with St Patrick’s was Fr Francis Murphy, who was soon appointed first Catholic bishop of Adelaide; his episcopal ordination, the first ordination of a bishop to take place in Australia, occurred at St Mary’s cathedral on 8 September, 1844. For the early years of its life St Patrick’s did not have a resident parish priest, and visiting clergy attended for Sunday Masses. 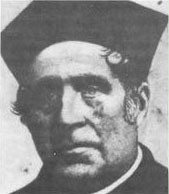 In 1861 Archdeacon John McEncroe was appointed parish priest. McEncroe, an Irishman, was one of the great pioneer priests in Australia, to which he came in 1832 after some years in Carolina in the United States. He was the major force in helping establish an Australian Catholic newspaper – initially under various names in the early 1840s, and then as the famous Freeman’s Journal which appeared weekly for almost a century from 1849.

The Davis home was still standing when McEncroe was appointed. He later purchased the house and adjoining land, and used the site to build two stone terrace cottages extending up to the Grosvenor Street corner. Completing them in 1863, he leased the one on the corner as a shop, and lived in the second, which faced Harrington Street. Basement rooms from these buildings still survive below street level, and can be inspected on an escorted tour. The Davis cottage was demolished in the 1860s, but recent archaeological investigation has uncovered the footings of the building, and these can likewise be inspected.

McEncroe died in 1868. It was his wish that the Marist Fathers, a French missionary order established in Sydney since 1845, should succeed him in the parish. At McEncroe’s funeral, the archdiocesan vicar general, Austin Sheehy, took Marist superior Victor Poupinel aside and offered the care of the parish to the Marists. Poupinel readily accepted, subject to permission from Marist administrators in France; this was soon given, and the Marist Fathers have been responsible for St Patrick’s from that time.

In addition to St Patrick’s church (1844), the St Patrick’s heritage site contains a number of other significant buildings: 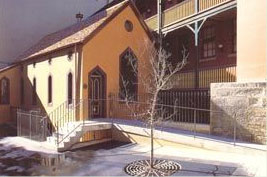 Convent Chapel: Built in 1876 for the Sisters of Mercy, who had come to the parish in 1865 to take care of the parish schools, this free-standing chapel has been fully restored to its former beauty, and has been given a new lease of life as St Patrick’s Courtyard Coffee Shop. On the outside of the building the original wood shingle roof has been reinstated, and work has been done on the exterior walls to arrest significant deterioration. However, the most obvious result of the restoration can be seen inside the chapel. Sufficient evidence of the original paintwork was uncovered to enable a complete restoration of the stunningly beautiful mural work. The dark panelled wooden ceiling has been likewise reinstated, and extensive work was done to revitalise the 1928 parquetry floor. The chapel stands on the site of William Davis’ 1809 cottage, and the footings of the Davis home can be viewed through glass panels underneath the chapel. 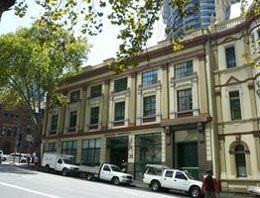 The Federation Hall building, no longer in parish hands

Federation Hall: This building, on the corner of Grosvenor and Harrington Streets opposite the former convent, was completed in 1891. It was built as a parish hall and was used for that purpose until 1914. There were shops at ground level, which were leased by the parish to tenants. The property was sold by the parish in the 1920s 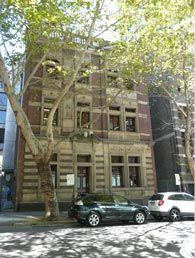 Former Presbytery: Dating from 1889, the former presbytery is a three-storey building at 137 Harrington Street. It was recently restored, and is now leased commercially by the parish. The building has large cellar and basement areas, designed to hold stores and equipment unloaded in Sydney in the late 19th and early 20th centuries for re-shipping to Marist missionary stations in the South Pacific. 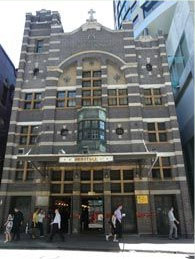 1914-15 Parish Hall: This building fronting Harrington Street adjoins the former presbytery. It was used as a parish hall from 1915-1994. It is no longer owned by the parish, and now hosts the Belgian Beer Café. The interior has been lavishly renovated to recreate a European beer-hall setting. A memorial stone can still be seen on the front of the building, declaring that it was blessed by Archbishop Michael Kelly on 3 May, 1914. 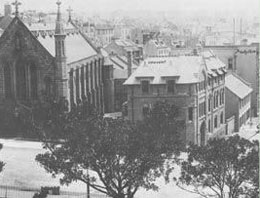 The former convent, on the corner of Grosvenor and Harrington Streets, now the residence for the Marist community at St Patrick’s

Former Convent: Completed in its present form in 1893, and recently restored as a residence for the priests who minister at St Patrick’s, this three-storey building incorporated substantial parts of Archdeacon McEncroe’s 1863 sandstone cottages as a cost-cutting measure. It was home to a community of Sisters of Mercy from 1893 until 1996. 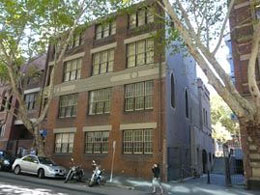